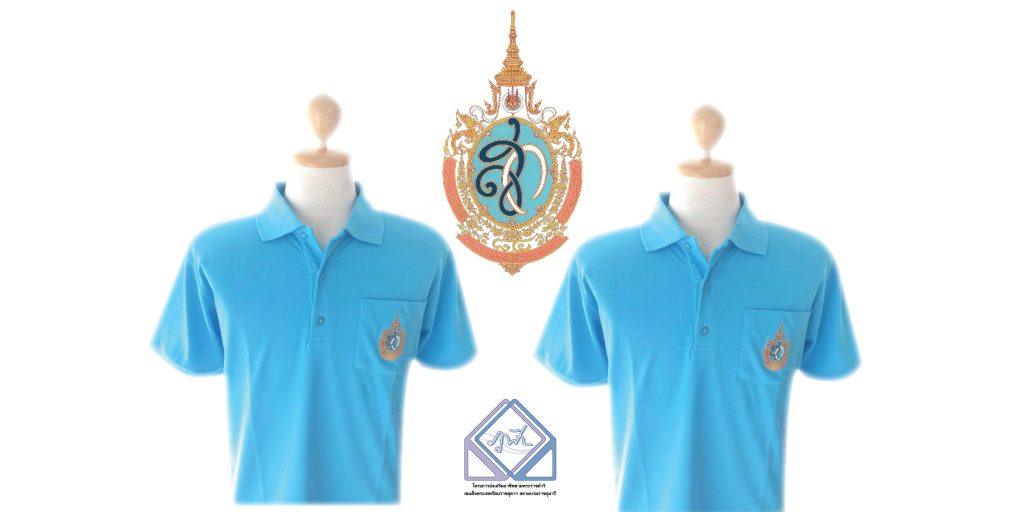 The blue polo shirts “Charoem Siripan” supplied by Phufa shop has embroidered the Celebrations on the Auspicious Occasion of Majesty Queen Sirikit’s 7th cycle 12 August 2016 emblem. The royal title character Sor Kor: Sor covered up with dark blue color represents her birthday, Kor covered up with white color represents the power color of her birthday. Queen Sirikit’s title character Sor Kor has the great golden crown enshrined above, and below the golden crown appears the trinity royal sword which represents the Chakri dynasty. Queen Sirikit’s title character Sor Kor placed in frame embedded with 7 diamonds represents the occasion of her 7th cycle birthday. The blue sky background shows the color of her birthday (Friday). Outside the seven diamonds frame appears a couple of the golden swan standing on the left and the right conveys that the queen is dignified as the golden swan. Outside the diamond frame, there is another decoration which is golden – blue sky divine bouquets designated as the queen’s royal flower. This emblem has also a label with the calligraphy “the Celebrations on the Auspicious Occasion of Majesty Queen’s Birthday Anniversary 2016” in gold color and the label’s background is light-vermilion to raise the glory for her birthday. To glorify her honor in the auspicious occasion of her birthday 84 years old, under the Queen Sirikit’s title character, there is the number 84 decorating with the divine vines named Chitralada, which the classic works explains that it only grows in the holy forest Chitraladawan, 1 of the 4 forests of Indra. It means the queen’s residence is also named Chitralada Villa Royal Residence. This vine represents of hope, as Her Majesty Queen Sirikit who gives the hope and the chance to the people, lifts their lives up from poverty with her royal grace the Foundation for the Promotion of Supplementary Occupations and Related Techniques, for example. Therefore, Thai citizens are united to bless “Long Live the Queen”.

All about Meow: A new exhibition at Phufa Treasure Trove
December 3, 2019

Phufa Shop Invites Thai People to Display Loyalty and Gratitude toward the King
May 30, 2016

Where Do Phufa’s Earnings Go to?
December 12, 2015
Facebook
Line