Then the Deputy Minister of the Ministry of Chinese Culture will give the blessing speech on the occasion of Chinese New Year. After that HRH Princess Siridhorn goes to Royal Bangkok at Chinatown Hotel in order to have the dinner. The organizing team prepares the auspicious foods including a rice noodle, referring to a long life; a Spiny lobsters salad, representing the power and charisma; a shark fin soup steamed with ham, meaning the accomplishment in life; and a sable fish steamed with soy sauce, referring to the prosperity since the word “fish” in Chinese is pronounced as “wee” which is a homophone of the word prosperity. Therefore, Chinese people often have fish on Chinese New Year.

Then, HRH Princess Sirindhorn takes an electric tram to Thian Fah Foundation in order to pay homage to Guan Yin image and also presides over the opening of Hemodialysis Center, Thian Fah Foundation Hospital, which was made possible by the unity in action and spirits of people who donated their money to buy the Hemodialysis machine for the public interest. After that HRH Princess Sirindhorn will visit the booths and exhibitions from Phufa shop, Queen Savang Vadhana Foundation, Sirindhorn Foundation, the Chaipattana Foundation, Doi Tung shop, Mae Fah Luang Foundation, the performance from Samphanthawong District, and the Exhibition on Thai-Chinese Education run by Wat Trimitr Temple.

Mr. Wisit said that HRH Princess Sirindhorn also takes a tram to Kasikron Thai Bank, Yaowarat branch before going to Wat Bamphen Chin Phrot or Long Hok Yee, the 200th Chinese Temple established since the early Rattanakosin period. Its named was given by King Rama Five. It is located in Yaowarat Soi 8. HRH Princess Sirindhorn will take a look around the temple and pay homage to the auspicious statues in the temple which were made by a special technique using a lacquered ramie cloth, which is an advanced Chinese art. However, the princess will not visit Dragon Temple Kamalawat this year since there is a merit making for the former abbot. In Chinese belief, it is considered inauspicious to enter the place where there is the deceased on the auspicious day.

For gifts that will be given to HRH Princess Sirindhorn, Mr. Wisit said, most shops offer a golden monkey such as the golden monkey figures or the golden monkey pendant. Also, he would like to pass the words to people who want to come greeting the princess that they can come from 16.00 p.m. onwards. The queue will start from Chalermprakiat China Gate, running along Yaowarat Road, around 1 kilometer long to Rachawong Intersection. Those who participate in the ceremony will obtain a Magic Monkey amulet which represents agility to promote the business’s success more rapidly.  This amulet is made on the occasion that Her Majesty Queen Sirikit’s 7th cycle birthday anniversary on 12 August 2016, limited to only 8,500 amulets. Moreover, people will have a chance to pay homage to Kasitigarbha, a god of prosperity imported from Jinhuashan, one of the four Buddha’s mountains in China. Also, they will have a chance to pay respect to the first Magic Monkey statue in Thailand from the Shrine near Wat Trimitr Temple which is invited to place in this event. 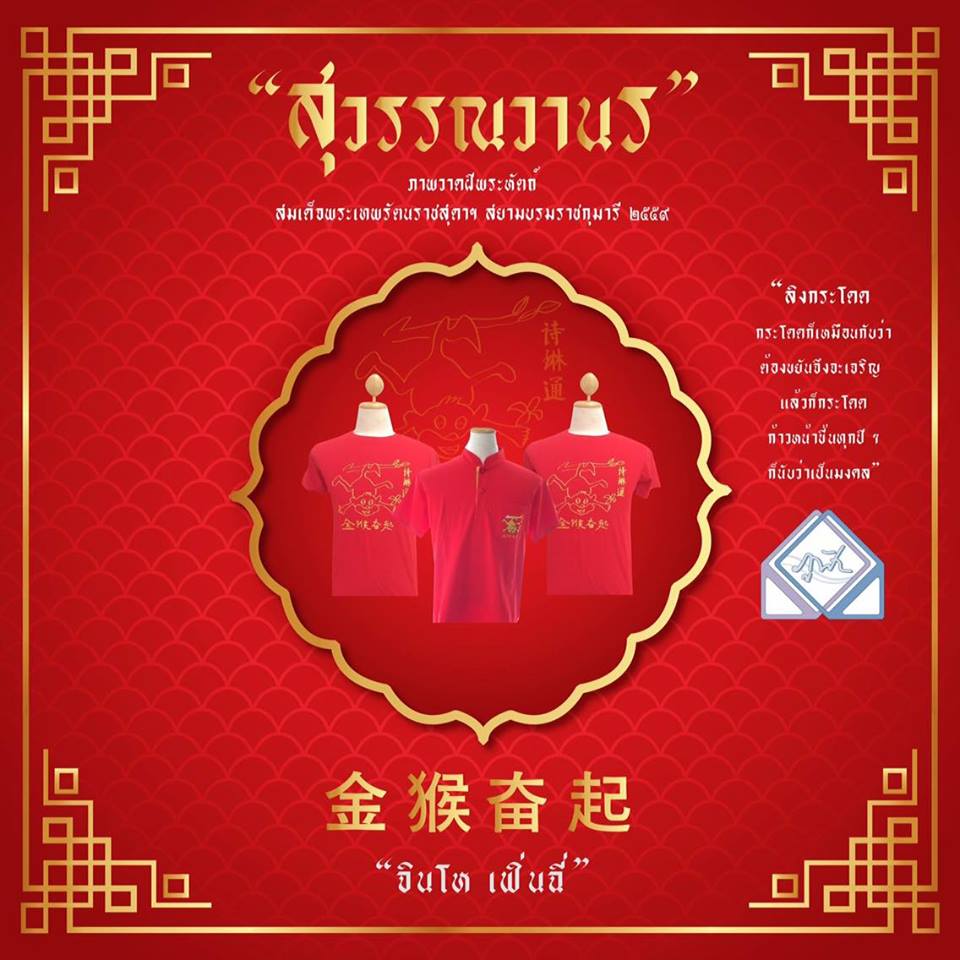 In order to celebrate the golden year of 2016, Phufa has asked for the permission to use HRH Princess Sirindhorn’s drawing, “the Golden Monkey,” to be in the red polo shirt, Sukreep edition as Sukreep, the powerful and intelligent monkey warrior of Rama, wears a red dress. The polo shirt is embroidered with HRM Princess Sirindhorn’s drawing on the left side pocket of the polo shirt. For a round neck T-shirt, the red color will be imprinted with the gold drawing. This collection aims at inspiring the wearer to start working hard and nimbly like a monkey. It is to wish everyone prosperity and success both in work and personal life for the whole year of 2016.

…Phufa shop “From the Local Wisdom to Sufficient Life”